Our country has abundant shale gas reserves and the proven reserves of shale gas ranks first in the world. However, its reservoirs are characterized by low porosity and low permeability and need more effective hydraulic fracturing to improve the permeability of shale gas in rocks. Therefore, it is more difficult to extract than other countries. At present, the basic difficulty of the hydraulic fracturing technology in China is how to form a large-scale cross-linked crack network in shale, together with desorption and displacement cooperation, to quickly extract shale gas.

Recently, Zhao Yaxuan, the State Key Laboratory of Nonlinear Mechanics at the Chinese Academy of Sciences Institute of Mechanics, focused on the solid-liquid interface shear stress of rock-fracture fluids in hydraulic fracturing, and conducted research on crack propagation law to find the viscosity of fracturing fluids. The shear stress generated at the solid-liquid interface has an important influence on the crack propagation law. This finding explains the fact that the measured value of wellbore pressure is much higher than the predicted value of the traditional model. It can be used to guide the selection of fracturing fluid and the optimization of fracturing methods, which has important application value.

It is generally believed in the industry that the fracturing hydraulic pressure remains basically the same throughout the crack, and only a sudden drop occurs near the crack tip. In the theoretical analysis, the researchers also found that the pressure has a singularity at the crack tip, and the strength of the singularity is related to the dominant mechanism of crack propagation (rock fracture energy consumption, the dominant mechanism of viscous fluid viscous energy consumption). Under the dominant mechanism of viscous fluid fracturing, the -1/2 order singularity of the classical linear elastic fracture mechanics disappears, the singularity of the fluid pressure at the crack tip is -1/3 order, and the solid stress singularity is also -1/ 3rd order, this is caused by the stress matching of the solid-liquid two phases. According to the balance of forces, the singularity of shear stress is stronger than that of pressure, so it is necessary to conduct a detailed study of the effect of shear stress.

Based on this, this study qualitatively analyzes the shear stress at the solid-liquid interface through the stress singularity at the crack tip. Researchers through the asymptotic properties of stress and displacement at the crack tip, combined with the newly established boundary and integral equations of displacement and stress fields, have found that the shear stress leads to crack closure; commonly used stress intensity factors and energy release rate calculation methods The correction of the shear stress needs to be introduced; there is a potential destabilization phenomenon of the crack propagation, and through the stress field and the strain energy density near the crack tip, the shear stress is obtained so that the crack has a tendency of cracking perpendicular to the crack surface. These discoveries theoretically prove that by controlling the fracturing parameters, the crack growth can be destabilized, which provides a new idea for the formation of crack network by hydraulic fracturing. On this basis, the researchers established a hydraulic-fracturing model of a full-stress fluid-liquid interface coupled to a common dish-shaped hydraulic fracturing crack and modified the crack propagation criteria based on the stress intensity factor. Expanded to the commonly used two-dimensional and quasi-three-dimensional hydraulic fracturing models to provide fast, accurate hydraulic fracturing design and simulation programs. Further studies have found that shear stress leads to longer and narrower cracks and higher wellbore pressures when the fracturing fluid viscous flow power loss and rock fracture power loss are negligible, and excessive shear stress causes cracks. There are potential destabilization phenomena at the wellbore and crack tip; there are two pairs of dominant mechanisms: pressure and shear stress at the solid-liquid interface, rock fracture power loss, and fracturing fluid viscous flow consumption, and the dominant mechanism is in fracturing. During the process, the transition occurred and the direction of change was related to the flow index of the power-law fracturing fluid. These findings explain the fact that the wellbore pressure measured value is much higher than the predicted value of the traditional model, and provide direction for the selection of fracturing fluid and the control of fracturing flow.

The above research work has deeply explored the important influence of the solid-liquid interface shear stress on the stress singularity and the dominant mechanism in the hydraulic fracturing process, and provided new ideas for solving the basic problems in the shale gas exploitation.

Related research results were published on the ASME Journal of Applied Mechanics. This research was supported by the National Natural Science Foundation of China Petrochemical Joint Fund, the Innovation Cross-Team Project of the Chinese Academy of Sciences, the Research Program of the Frontier Scientific Research Project, and the Strategic Pilot Science and Technology Project. 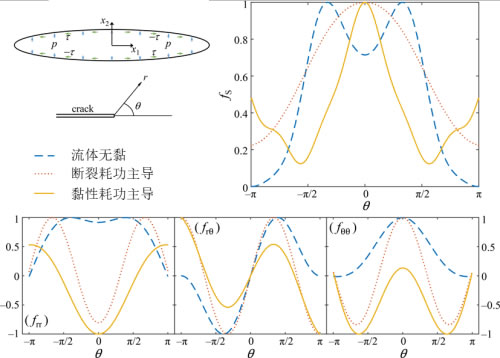